We love summer because of popsicles, swimming pools, and road trips. It’s that time of year when we get to take time off to explore new places and create new adventures. To help you celebrate summer and plan your next trip, we reached out to a group of Heritage Driven friends who have lots of overland experience and asked them to recommend their favorite off-the-grid trips and destinations. We’ve also included links at the bottom with even more trip suggestions so you can find an adventure no matter where you live.

Graeme Bell and his family live on the road full time and have been on so many epic overland trips we’ve lost count. Even better: many of those trips were done in a workhorse Defender they’ve customized over the years. We recently caught him on the phone while he was on an overland trip through Mexico and stationed in the beautiful town of Oaxaca. When asked for his favorite overland route in the United States, he said the Alvord Desert beat out everything by a long shot. It’s a playa lake (think dry lake bed) that has the Steens Mountains towering above, creating a stark contrast. Graeme loved exploring the glacier-carved valleys that flow into the playa and said the local hot springs are some of the best he’s ever visited. “It’s a very special area and it should be way more popular. I have told a million people but it’s still a well-kept secret. If you want a place where you can go and not see anyone for three or four days, that’s the place,” he says.

When we reached out to Sean Jennings who runs the account @defconbrix he didn’t want to give us a specific route. But that’s a good thing. Instead of heading to a particular road, he likes to pick an area of the country he wants to explore and then leave things to chance. He’ll take dirt roads just to see where they lead. “Knowing where a road leads or ends takes away some of the adventure for me,” he says. He does suggest that if you’re going to leave things to chance, be fully prepared to tackle whatever the road throws your way. For the days he does plan, he relies on the onX app to help him map things out and ensure he gets where he wants to go.

This suggestion comes from Tim McGrath, who runs the account @sackwear. He’s a talented designer who’s currently in the process of illustrating several of our vehicles for an upcoming series of shirts, hats, and other schwag we’ll be offering on our site. He also drives a beautiful Toyota Land Cruiser Maltec conversion. His favorite spot is called Denver Lake and it sits right below Engineer Pass on the Alpine Loop in Colorado. There are just a couple camping spots at the lake, but they’re absolutely gorgeous and have giant 360-degree views. You’ll need a high-clearance four-wheel drive to get up the section of the Alpine Loop that accesses Denver Lake, but there aren’t any gnarly obstacles and it’s a fairly quick drive once you leave Silverton.

Richard and Ashley Giordano shot to Instagram fame after they drove their 1990 Toyota pickup truck from British Columbia down to Ushuaia, Argentina. Nowadays they’re still heavily involved in the overland community and Richard works as a content creator (@desktoglory) while Ashley (@desktoglory_ash) is a Senior Editor at @overlandjournal and @expeditionportal. Richard says that even with all the traveling they’ve done they still love this route in their home country of Canada. It starts at Waterton National Park and heads north to Coleman on the major roads. In Coleman, turn off on Highway 40, which is gravel, and head north and camp in Livingston. The next night, head to the paved area of Highway 40, go north and take Highway 743 all the way to Canmore. From Canmore you can visit Banff, Lake Louise, and Icefields Parkway (look all that up on Google maps and it quickly makes sense). Richard recommends this route because it’s easy to drive but gets you away from the crowds and into the middle of the Canadian Rockies where there are stunning views of jagged peaks, pristine lakes, and hundreds of incredible hiking and biking trails along the way.

Patrick Nuhfer and his family (they go by @takethetruck) are on the road for about three to four months each year and have covered a lot of ground. But they’re always happy to come back home to Arkansas and camp in their backyard. One of their favorite spots is the Ozark-St. Francis National Forest where Patrick says there are hundreds of miles of beautiful forest roads and lots of sites to explore such as Alum Cove Natural Bridge and the Buffalo National River plus any number of great hiking trails. The area has gotten more crowded because of the COVID pandemic, but Patrick says it’s nothing like the more popular overlanding areas out west and that people should be able to find plenty of room to explore. 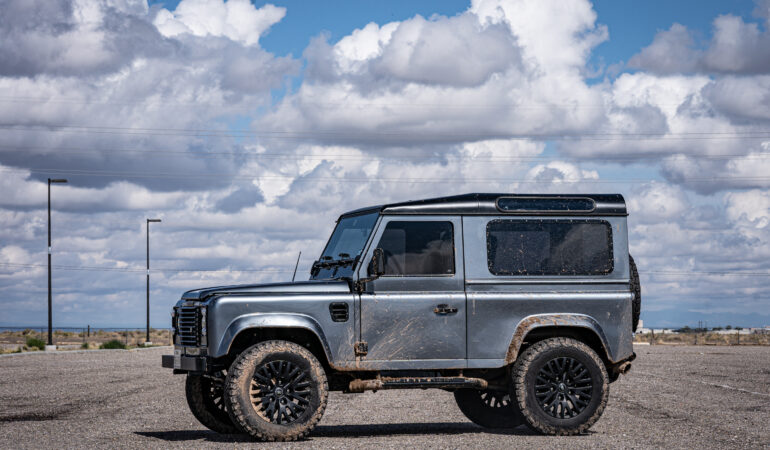 What Kind of Medical Kit Should I Carry in My Defender?

We Use Cookies
We use cookies to optimise our website and our service.
Manage options Manage services Manage vendors Read more about these purposes
Preferences
{title} {title} {title}